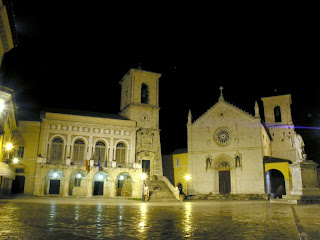 Norcia, (Latin: Nursia) an ancient town of Italy, in the province of Perugia in southeastern Umbria, at 604 meters (1982 ft) above sea-level in a wide plain abutting the Monti Sibillini (National Park of Sibillini Mountain), a subrange of the Apennines with some of its highest peaks, near the Sordo River, a small stream that eventually flows into the Nera, and the town is thus popularly associated with the Valnerina (the valley of that river). The area is known for its clean air and beautiful scenery, and is a very good base for mountaineering and hiking. It is also widely known for hunting, especially of the wild boar, and for sausages and ham made from wild boar and pork, to the point that Norcia has given its name to such products: in Italian, norcineria.
The main church in town is the basilica dedicated to St Benedict, still maintained by a Benedictine monastery in modern times. Though the present edifice was built in the 13th century, it stands on the remains of one or more small Roman buildings, sometimes considered to have been a Roman basilica, or alternately the actual house in which the twin saints were born.

Other churches include the Renaissance church of S. Maria Argentea (the Duomo) and the Gothic church of S. Agostino with its many votive frescoes of St Rocco and St Sebastian.

A papal fortress, the Castellina, was built in the 16th century and now houses a small museum with Roman and medieval artifacts, and documents of the Middle Ages and later periods.

Car services are available 24 hours a day, 7 days a week.

Our services also include Chauffeur driven transport to the airport of your choice.
Our driver will be in the Arrivals Hall at the Airport, holding a board with your name.
We'll waiting for you until one hour after the flight arrived. However if your flight has a delay, our driver will continue waiting for you. Provided you have specifically requested this service at the time of booking. There is an hourly charge for waiting time after the initial 60 minutes, payable on arrival of €.15,00 or part thereof.

For family bookings, we also offer also baby and toddler seats for the little ones. Please state requirements at the time of booking.

Civitavecchia Port Transfers to and from Rome/ Rome Airport (Fiumicino/Ciampino)

Fattori Car Service offers transfer Services between Civitavecchia port and Rome, to and from the Rome's main airports: Leonardo da Vinci (Fiumicino) and/or Ciampino and for any Italian locality
If you’re on a cruise and you have limited time in the eternal city, we don’t recommend you waste a single minute: Fattori Car Service in Rome pick you up into the city centre as quickly as possible.
Our cars are available for half days or full days

Driver meets you on the pier at exit, after you have located your bags. He will hold a sign with your name on.
We are specialized in tours of Rome and excursions from Civitavecchia Port to Rome and return.


We organize tours to the main shopping malls and outlets in Rome: